Please enable JavaScript in your browser.

This album is large with hard covers and grey card pages. A sticker on the back cover identifies it as a “Morehouse Photo Album, Pat. Dec. 8th, 1891. Jan. 2d, 1894. July 23d, 1895.” The photos in it seem to have been taken by Thornton Wheatley with an early Kodak Brownie camera. They include scenes of Sandon, B.C., where Thornton’s brother Werner and sister Harriet and her husband lived in 1896-97; shots of various places, identified and unidentified, in the Pacific Northwest; scenes of Northumberland and Altoona, Pennsylvania, apparently taken when Thornton accompanied his father’s body home in 1900; and scenes that appear to represent a trip across the country, with views of St. Louis and Salt Lake City. It was apparently on this trip that Werner visited the old farm near Gravois Mills. This trip may have taken place in 1900 on Thornton’s return from Pennsylvania, for there exists among the Wheatley papers a document in the handwriting of Thornton’s mother Mildred Humes Wheatley with notes on people to call on and houses to photograph in Pennsylvania and Missouri, and the photos in this album seem to match these instructions. Another possibility is that the trip happened in 1904, when Thornton and Werner went to the St. Louis Exhibition.

The pictures show the old farm, which had passed out of the Wheatley family’s hands probably in 1873, in dilapidated condition. Some of the old slave cabins still existed. Other photos show the Humes brothers’ grist mill and woolen factory, at Gravois Mills.

Some of the photos are marked with pencil; I have not attempted to remove the marks. A few of the photos have pencil captions, some possibly in Thornton’s hand, others added later by other hands. These captions are transcribed in italics.

The original form of the house may be represented by this plan, sketched by Mildred on the cover of her recipe book about 1860, in Pennsylvania. The general form - rectangular house, with a built-on porch to the right extending beyond the end the house - resembles the building shown in the photos. The differences may be due to alterations to the house made after Mildred’s sketch. 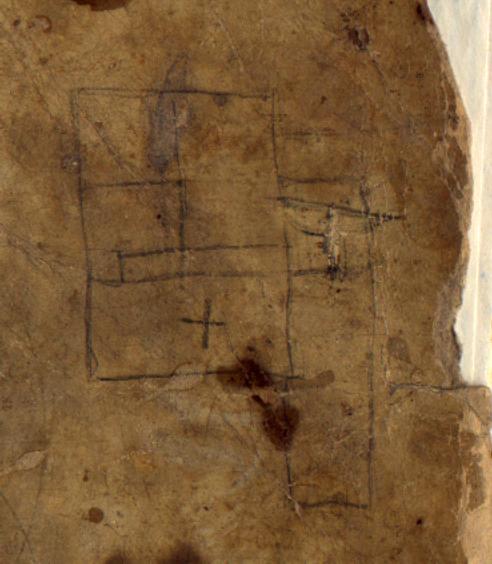