Please enable JavaScript in your browser.

The farm just north of Gravois Mills was purchased by William Humes sometime in the 1830s or 1840s. He and his father, who had recently moved from Virginia, already owned land in neighbouring Miller County. The farm bore the name “Val de Moulin” - valley of the mill - because of the nearby grist mill that gave Gravois Mills its name. This mill also came into the possession of the Humes family, together with a woolen factory. After William’s death in 1848, and his father’s death in 1853, the farm and the mills were run by William’s three surviving sons: Joseph, Thomas and Ed. Their sister Mildred married William McCoy Wheatley, who had moved to Missouri from Pennsylvania in the mid-1850s.

During the Civil War the Humes family had a difficult time. Mildred and William Wheatley spent the war in the North; Ed served in the Confederate army; Joseph had his house pillaged by Union soldiers. After the war William and Mildred returned to Missouri and took possession of Mildred’s childhood home, where they lived until 1873. It is not clear what happened to the property after this: it may have been taken over by one of the Humes brothers, or it may have been sold. In any event, by 1890 the Humes family had all left Gravois Mills, and the farm was in other hands (the family cemetery having been reserved). When Tom Williams visited the area in the 1960s, he was told that the old house had been torn down some years before.

William and Mildred’s son Thornton seems to have revisited the old farm twice with his camera. The first time was probably in 1900, and the second was probably in the early 1930s. The photos he took are preserved in two albums, and are presented here. At the time of the first visit the farmhouse and buildings were terribly run down; by the time of the second visit, however, the house had been renovated and expanded, and a new barn had been built.

The aerial photograph and topographical map (below) show the current situation at the site of the old farm. The family cemetery is still a wooded plot; the current house and barn lie just east of it, along a lane. (The power lines on the topographical map appear to have been removed before the air photo was taken in 1994). Comparison with the views of the farm taken by Thornton suggests that the old house stood just north of the current structure, on the other side of the lane. 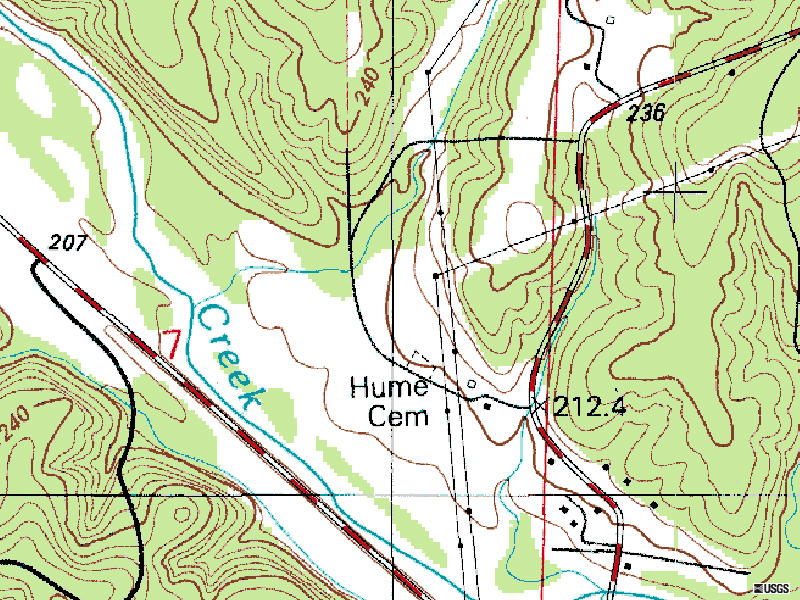 (These images were created by TerraServer.)

Thornton Wheatley’s photographs are presented here in the same arrangement as in the two albums.