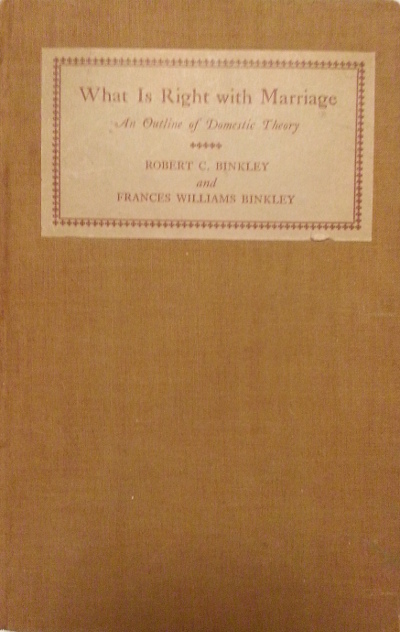 What is Right with Marriage began as a sort of academic joke: an attempt to apply every social science theory at once (sociological, economic and political) to the micro-society of the modern married couple. Bob described it to a friend:

All in the course of a few months we have achieved a book, a new job, a trip abroad and a baby. The book was one that began as a joke at Stanford, and eventually became a more serious pastime. It is, like the baby, a joint product, signed by Frances and myself, and baptised (by the publisher) “What is right with Marriage.”

What it turned into was an essay attempting to define the personal space which the aggregating theories cannot explain, to develop what the Binkleys called “domestic theory”. The book was a contribution to the 1920s debate on marriage which followed first-wave feminism. The Binkleys felt the time was ripe for this debate: “A greater number of genuinely useful books on marriage have been published since 1920 than were published in the preceding century.” (p.16) The book was not a great commercial success, but it did sell and was reviewed; and the advance financed the Binkleys’ trip to Italy in the summer of 1929.